1976 marked the U.S. Bicentennial and the Gay Pride Committee selected “Gay Spirit” as the theme for that year’s march. Many participants marched with banners and signs emphasizing the gay community’s right to freedom. That year, the Pride committee established a $5 fee for floats or vehicles and created a detailed set of guidelines for participating groups. A permit was once again obtained, although initially refused by the city – a pattern that would continue for nearly a decade.  Jeri Dilno, activist and then-director of the Center for Social Services (CSS), played an important role in the success of the 1976 march and rally. The march was nearly cancelled the day of the event due to a dispute over the involvement of the Socialist Workers Party (SWP) in the march. The Socialist Workers Party was a leftist organization that included gay rights in their political platform, although it wasn’t their sole purpose or priority. Members of the San Diego SWP showed up on the day of the march, June 27th, prepared to participate with a large banner for their organization. Some members of the gay community felt it was inappropriate for the SWP to carry a banner that would draw attention away from the parade’s primary message. Dilno was one of these disputers, and since she held the permit for the parade in her name, she announced she would withhold the permit unless the SWP disposed of their banner. SWP complied initially but reportedly displayed their banner once the march was in action. Overall, there was an increase in participation that year. New organizations to form in 1976 included Stepping Stone (a recovery center), Gay Activists of San Diego, and the Christine Jorgensen Society (a trans awareness group). 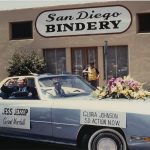 NEWER1977: “Unity (A Day With Human Rights Is Like A Day Without Sunshine) / No More Miamis” 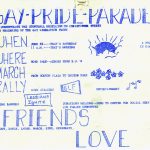