In 1994, former San Diego Mayor Roger Hedgecock, who had declared Human Rights Day in 1983 to overlap with Pride weekend, shifted more sharply to the right and began advocating for homophobic action on his conservative radio show. Inspired by Hedgecock, a right-wing group called the “Normal People” organized to protest San Diego Pride and “restore America.” The group petitioned to march in the parade but was denied; they then filed a lawsuit which was also unsuccessful. In response, the contingent of two hundred people who were banned from the Pride parade held a rally in a Veterans Administration building parking lot in Mission Valley. Reportedly, many straight people showed up in support of the community in response to Roger Hedgecock’s crusade and the Normal People. Despite this resistance, San Diego Pride had some cause for celebration. A week before Pride, a San Diego Superior Court judge ruled in favor of police officer Chuck Merino who had been ousted from a Boy Scouts Explorer post for being gay. And on July 9th, three hundred lesbians marched down University Avenue in a Dyke March organized by the Lesbian Avengers. That year, the 501(c)(3) nonprofit incorporated and underwent some identity changes. Although still officially called “Lesbian and Gay Pride,” the weekend of July 15-17, 1994 was described as “a celebration of lesbian, gay, bisexual and transgendered people” in the souvenir program. Additionally, the event saw an increase in corporate Pride sponsors, including Motorola, 92.5 “The Flash,” and Starbucks Coffee. The annual rally was newly named “the Spirit of Stonewall Rally.” Three community members were selected as Grand Marshals. Morris Kight, who had been honored at San Diego Pride in 1975, was once again honored. Peri Jude Radecic, executive director of the National Gay and Lesbian Task Force, and Tseko Simon Nkoli, a South African gay activist, also shared the honorary title. Many awards were granted to community members this year as well. The late James Mitsuo Cua was honored for his extensive résumé of community service work, including founding several groups and his role in bridging diverse communities. Cua founded Gay and Lesbian Asian Social Support (GLASS) and the Asian-Pacific Democratic Club, held a 1988 forum on racism in the gay community, and was integral to the foundation of Lesbians and Gays of African Descent United (LAGADU). Other community service honorees included Vertez Regina Burks, Scott Fulkerson, and Renee Richetts. Also honored were “Man of the Year” Marco Flores, a San Diego activist for Latinx people living with AIDS, and “Woman of the Year,” Council member and longtime activist Christine Kehoe. Nicole Ramirez-Murray received a Lifetime Achievement Award. 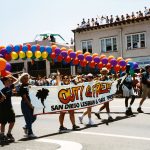 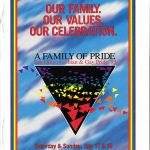 OLDER1993: “A Family of Pride: Our Family, Our Values, Our Celebration”