1977: “Unity (A Day With Human Rights Is Like A Day Without Sunshine) / No More Miamis” Despite the infighting and dispersion of niche interest groups that occurred the previous year, participation in the 1977 Pride march increased. That year, former Miss America runner-up Anita Bryant began crusading against gay rights and was involved in overturning a Florida ordinance prohibiting discrimination based on sexual orientation. Bryant then pushed a Christian fundamentalist-backed national campaign called “Save Our Children” which fought to prevent gay teachers from working in education. The gay community responded with outrage on both national and local levels. The theme of the march became “Unity (A Day With Human Rights Is Like A Day Without Sunshine),” which referenced Bryant’s commercial for the Florida Citrus Commission proclaiming that “a breakfast without orange juice is like a day without sunshine.” Over one thousand people attended the Lesbian and Gay Men’s Pride march on June 26th. Many participants carried signs protesting and criticizing Bryant. That year, more organizations began marching in contingents. Jess Jessop and Gloria Johnson were grand marshals. 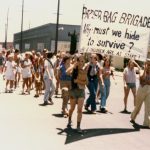 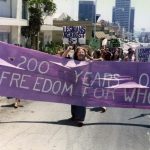